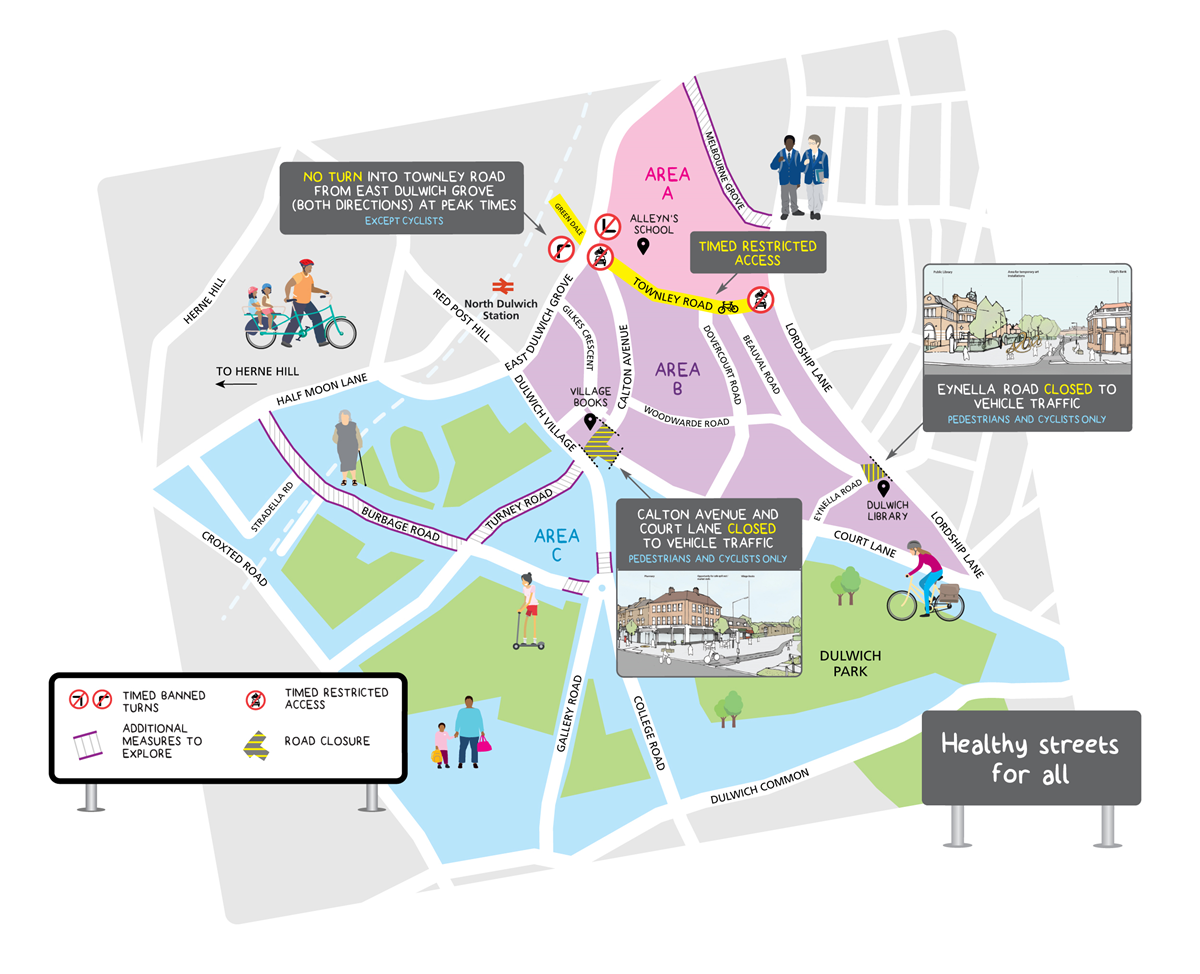 Some Turney Road residents attended the first consultation on 8 February on Southwark Council’s Healthy Streets responses to community, London Mayor & Government pressure to do something about our heavy traffic load and the poor air quality we are enduring.

The 3-hour discussion has given us an understanding of the background to the initiative and the issues we face.

There are two more consultations.  Try to attend one of them:

Saturday 29th February, 9am to 12.30pm at Herne Hill Baptist Church, Half Moon Lane at the corner with Winterbrook Road

Following the consultations we are thinking of having a meeting for residents either separately or with Burbage to discuss and look at the pros and cons of possible options so we can present to Southwark our thinking and views. We will also run an online survey about the options as not everyone will be able to make a meeting.

Turney Committee members have met with our two Councillors and they have written to us expressing the Council’s keenness to consider all options.  This is reiterated in the contents of an email ( see below) from Margy Newens one of our Councillors and has also been expressed by Richard Leeming our other Councillor and also by Clement who is the manager of the project in Southwark.

This is absolutely an open process.

The background is that TfL [Transport for London – under the Mayor of London’s jurisdiction] came up with some money and a pre-designated area that it wanted to investigate (Area B on the map, plus an equivalent area on the other side of Lordship Lane, i.e. outside Dulwich Village Ward). Our initial response was that it would not work, because it was too limited. However, as the funding could not be extended we had no option but to begin, at least, focussed on that area.

During Phase 1 we asked people to identify problems in that area – of which there are a multitude. In Phase 2, we reported back those problems and gave people a “toolkit” to deal with them. This toolkit consisted of a range of interventions from doing nothing to closing roads and several options in between. The hundreds of responses received did err towards the radical end of the spectrum.

At this stage, those responses have been digested and the current Area B proposals put together. In doing so, the merits of our original argument against simply focussing on Area B are clearer than ever. It is precisely for this reason that at this stage we are extending the consultation to cover the lower Dulwich Village/Turney/Burbage area (and Melbourne Grove to the north east, again outside this ward). You are absolutely right that the proposals for Area B have strong implications there and this is why we are asking residents their views on what interventions, if any, they feel are necessary in this wider area. Officers have offered suggestions that will mitigate the effects of the proposals for Area B.

I think it is fair to say that no solution is perfect, however, the least perfect solution is to do nothing. Proposals will be modelled properly to highlight any unexpected consequences – there are sophisticated tools for doing this. Nothing is set in stone and things can be tweaked. But we do need to start somewhere. Both Lambeth and Lewisham are developing extensive low-traffic neighbourhood proposals covering a much wider area than the Dulwich proposals and there is a danger of becoming a smokey corridor between the two. The reason they are doing this is that, just as in Dulwich Village, there is an effective public health emergency in terms of the air we are breathing. This has to be addressed.”

Turney residents need to be thinking of what we want to achieve for the future of our road. What type of road do we want to be living in for the future: as it is now, with more traffic and parking issues, less non-residential traffic, more clean air, more or less parking of non-residents etc. How can we achieve what we want whilst continuing to allow reasonable access for ourselves, the services we use, the sports grounds etc.

At present the main themes, coming from Turney residents, include a) having a permeable closure in the road to stop through traffic but allowing cyclists and pedestrians through; and b) having timed closures both ways or one way at different times, not doing anything.  Whatever options we take forward it will mean some changes either through having more traffic in the road, fewer ways out of the road and therefore slightly longer journeys at times. Whilst we do not know whether the suggested scheme for the Village will definitely go ahead we need to be prepared with solutions for Turney and Burbage.  Across London and other cities there is an growing move to reduce motor use and pollution and we need to be sure we are not the last road still being a rat run and car park.

There are further pressures on us to think about the future.  1) On 24 February parking charges in Dulwich Park commence.  2) The extension of the CPZ (Controlled Parking Zone) in Croxted Road from the petrol station to the junction with Turney will be going ahead soon.  3) Parking in Rosendale Road will be reduced should the implementation of the Healthy Routes (Quietway) in Lambeth go ahead, which is being consulted upon at the moment.  We need to consider the pressure on parking that is likely to increase following these three sets of parking controls.  Turney Road is free of any parking controls and therefore is free for anyone to park.  Therefore the idea of a CPZ is back on the table. The Survey we ran on parking back at the end of 2018 suggested that there was a fairly equal split at that time in both Burbage and Turney about having a CPZ.